Menu
Back to Blog list
PrevOlder postLiving in Limbo
Newer postRomp at the Beach!Next

Last Friday, April 13th, my brother Ralph flew out from California to drive back with us.  I picked him up at the Omaha Nebraska airport at 2:15 PM and we literally hit the road, after picking up lunch for him at McDonald’s.  Rua was safely fastened into the back seat and the SUV was loaded to the brim.  The original intention was to arrive in San Mateo CA Sunday, around 4PM.  That would put us there in time to join everyone for our sister Dawn’s birthday dinner at sister April’s house.

I drove the first 3 hours or so partially across Nebraska.  If you have ever driven across Nebraska, you know it seems to go on forever.  The plan was to drive to Sidney NE and spend the night.  But, as we got close to Sidney we decided we could go further than that so we decided to go to Cheyenne WY instead.  Well, Ralph didn’t mind driving, and I was a woman on a mission, so before we knew it, we arrived in Rawlins, WY at 11:15 PM (gained an hour).  We drove approximately 630 miles on Friday.  Rua was such a great little traveler, sleeping quite a bit of the way.

We spent the night at the Days Inn.  I didn’t sleep very much, excited about arriving in CA and trying to keep Rua from barking at every little noise she heard.  Her kennel was packed at the bottom of the pile and I didn’t want to have to unpack the entire back end of the SUV to get it out.  We got up about 6AM, and after the nice hot breakfast the motel provided, we got back on the road at 7:04.  We encountered some snow and slushy conditions during the first 1 or so of the drive on Saturday morning.  About 40 minutes into the drive, I noticed a semi ahead of us with Arpin written across the back of the trailer.  I announced to my brother that my stuff was on that truck!  As we passed the truck, I read Holiday Van & Storage – Omaha, NE on the side of the cab.  We did indeed pass my belongs.  What a small world!

Based on the amount of road time we had done the day before, we knew that, while it would be a long drive, we could reach San Mateo late that evening, so we went for it.  We had 1050 miles to travel.  It was a really long ride for Rua and come late afternoon, it had taken a toll on her.  The poor little thing was so darn tired she was sleeping sitting up. 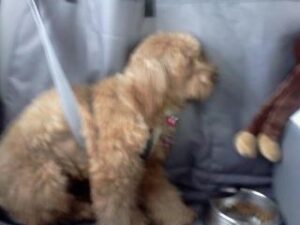 I had hoped to be able to use my little Toshiba Netbook, tethered to my cell phone accessing the internet, but the vast majority of the trip we had no cell service.   Everyone was expecting us to arrive on Sunday, and it wasn’t until 5:30 that we were finally able to tell everyone we were going to arrive later that evening.

We finally pulled into sister Dawn’s driveway at 10:07 PM Saturday evening after 16 hours of travel.  It was such a long day but so well worth it to finally arrive in California and be here with family.  It was nice knowing we could get a good nights sleep and be able to spend the whole day with the birthday girl.  Here is our first picture together as California Girls! 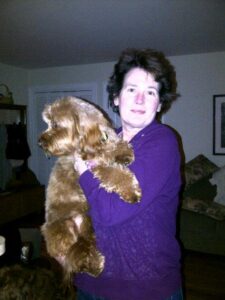 Rua and I were both pretty tired and both of us slept pretty well on Saturday night.  I was sleeping on a blow up mattress and I put Rua in her kennel since I didn’t want her barking should she hear strange noises.

Over the past few days we have been getting settled into sister Dawn’s house and our “room”.  Our stuff arrived yesterday and last night, for the first time since March 27th, Rua & I both slept in our own bed.  I was a bit concerned Rua might bark at strange noises, but she was a good girl.

Today, we truly embraced life as California Girls.  I needed to pick some food up for Rua and chose to drive to Pacifica to get it (about 25 minutes on the California coast).  It was a beautiful day for a drive, so Rua and I took off, with the GPS guiding the way.  We encountered no traffic to speak of, thank goodness.  I can’t even tell describe the feeling I got when the Pacific Ocean first came into view.  Looking at the ocean made me feel so incredibly happy.

After we picked up some food for Rua, I drove up the road a bit towards a pier and found a place to park.  Rua and I took a little walk and then decided to walk down to the beach.  Here are some pictures of the beach and of Rua playing in the sand! 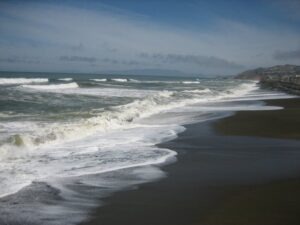 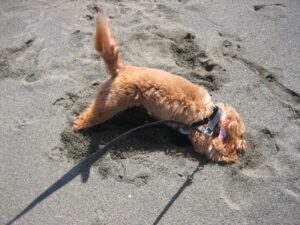 Rua really, and I do mean REALLY, loved the beach.  Here are a couple of videos!

Rua at the Beach

Rua – In the Ocean

It was a wonderful day!  We are truly California Girls now.

I love my Life with Rua!

It has been quite a while since I have posted, 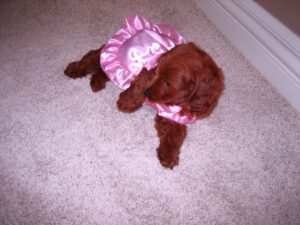 It has been 1o months since I wrote my last

OK, here is the rest of the story.  It started

Romp at the Beach!

It was a first for Rua today.  I let her